The Government of Catalonia, through INCASÒL; the Barcelona City Council and the Barcelona Metropolitan Area (AMB) are at Expo Real 2019 for the eleventh year in a row, renewing their commitment to the Barcelona Catalonia project to support inclusive, sustainable, cohesive development models. Expo Real is one of the top real estate fairs in the world, held this year from 7 to 9 October in Munich (Germany).

The projects Barcelona Catalonia is presenting under the slogan Keeps on rocking! reflect the international, open, cosmopolitan vocation of the city of Barcelona, its metropolitan area and Catalonia. These same factors, among others, have put the Catalan capital fourth on the ranking of world cities best at attracting talent, surpassed only by London, New York and Berlin. This is according to the study “La marca ciutat com a factor de creació de valor” (City brands as a way to generate value) compiled by EAE Business School, which analyses various aspects of each city, including its cultural capacity, level of intellectual wealth, creative capacity and ongoing innovation.

Furthermore, the city of Barcelona is also the third best start-up hub in Europe, based on data from 2018, just behind London and Berlin.

Barcelona Catalonia: Talent, Workspaces, Housing. Mix it to achieve it!

In this context, Barcelona, as a driving force for talent and incubator for start-ups and new workplace models, through the Barcelona Catalonia project, aims to participate in the debate and tackle the challenges arising from the mixed-use city model, in which people, innovation, talent and investment all co-exist. The second Barcelona Catalonia Conference: Talent, Workspaces, Housing. Mix it to achieve it! will attempt to address to this approach, as part of the official Expo Real programme. Roger Costa, FDI deputy director of Catalonia Trade & Investment (ACCIO), will moderate the panel discussion featuring Benjamin Nachoom, CEO of OneCoWork; Vanesa Carceller, CEO of JLL; and Maria Sisternas, CEO of MEDIAURBAN. 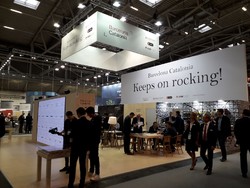